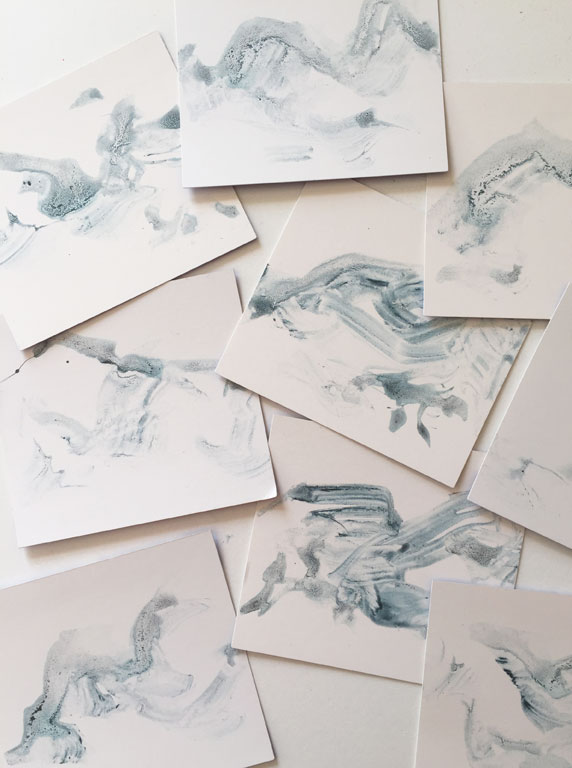 There is a particular pleasure in working on small panels – they can become artworks independently or put together to tell a larger story. They can be worked on progressively, a few at a time, then set aside and more done, in a way that is difficult with a larger single panel work.

The genesis for this work came from browsing in the paint department of our local hardware store. The bundle of neutral coloured paint swatch cards I collected became my support. The perfectly smooth surface was a delight to work on. The picture above shows some of the cards with the initial marks that were my starting point. These were created using Liquid Pencil (one of my frequently used kinds of media, see here for other examples). I made a thin solution of Liquid Pencil, which is a paste of graphite, with some colour added, in this case blue, and used an old and very battered paintbrush which had bristles sticking out at all angles. This made random and unexpected marks. Once it was dry I could start working into it with coloured pencils – only tones of blue in this case – plus occasional marks in graphite.

In the beginning the base marks could have developed in any direction, but gradually a sense of cold, wild, barren landscape began to emerge. Having visited Iceland in winter a few years ago, and more recently Norway in winter, memories of those landscapes must have influenced my interpretation. 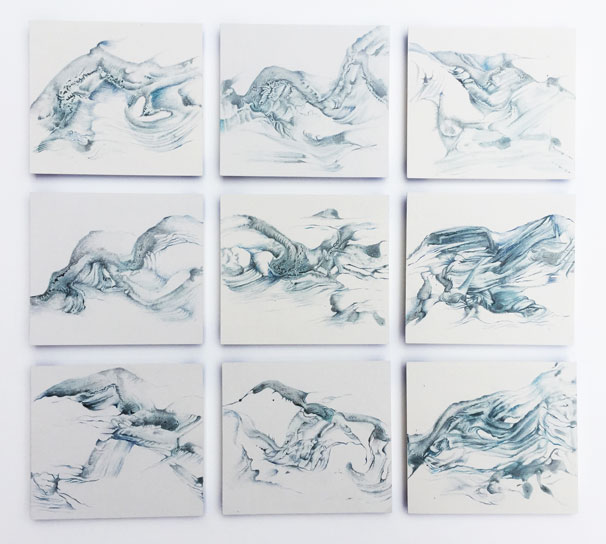 For the final combined artwork I chose nine panels and arranged them so that they flowed together – this is something that was not planned in the beginning, but was just serendipity. The title I gave this is ‘The End of the Earth’ an intended double meaning to indicate concern for the impact caused by climate change on landscapes such as these.

Each panel is 9 x 10 cm, and I mounted them so that they floated just above the surface, and they are now in a white frame. At present the artwork is hanging in the Ewart Prize, a selected exhibition in Willoughby, NSW. I was pleased to have the work hung – 120 entries came in and 72 were selected. However, I have submitted this artwork to 2 other exhibitions earlier this year and it was not selected for either. After many years of doing this, I am still disappointed when a work is not selected, but not daunted. I have great faith in this piece and felt sure it would eventually be recognised!

Below are the individual panels, click on them to see them larger.