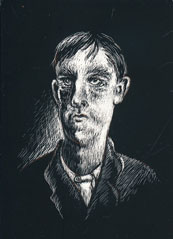 Last Friday was the opening night of the Australian Society of Miniature Art annual awards exhibition. The society is based in New South Wales, but we have members from all over Australia. There are generally two exhibitions a year, one for members only which is held in a different gallery each time, and the awards exhibition which is open to non-members.

This year there were 151 works in seven different categories – drawing, watercolour/gouache, printmaking, oil, acrylic, mixed media and 3D and handmade books. The judge, who changes every year, was Cherry Hood, an Australian artist who is well-known for her large scale portraits in watercolour. Judging is a big job – each section plus ‘Most Innovative Work’, ‘Best Traditional Work’, a special award that has a different focus each year, this time was for a work depicting the human form, ‘Most Imaginative Drawing’, and of course ‘Best in Show’.

I submitted four works, all of which were accepted. Two in drawing, one 3D and one – the piano key I have shown before – in oil. To my delight I was awarded a Highly Commended for the piano key. The judge’s comment was ‘An extraordinary concept – oil paint on a piano key. Very enticing and exquisite.’

At the top is one of my drawing entries, which I called Convict No 4. It is done on scratchbord, which is a board covered with black paint over a white chalky surface, so I create the image by scratching into the surface, revealing the white. Thinking in reverse is tricky at first, but becomes second nature after a while. I started this one a long time ago, and kept coming back to it, getting a bit braver all the time, taking off more of the surface. He is part of a series of Victorian convicts in miniature – you can see more here that were done in pencil.  He is 6 x 8.5 cm.

The second drawing is called ‘The Invisible Man’. It is a commentary on how tattoos sometimes seem to take over the entire person, and become more anonymous over time. It is 9 x 8 cm, drawn with liquid pencil, graphite and coloured pencil. I drew the silhouette of the body builder, then placed it randomly over the previously prepared background to create the man’s body.

My 3D work is intended to also go into the Japanese-themed miniature exhibition in August, so I am hoping it doesn’t sell in this exhibition! It is a miniature version of a larger work I did earlier this year, but using different original prints, cut up and assembled into a structure of interlocking panels that suggested Japanese architecture to me, so I have called it Architecture in Japan. It is 14 cm tall. 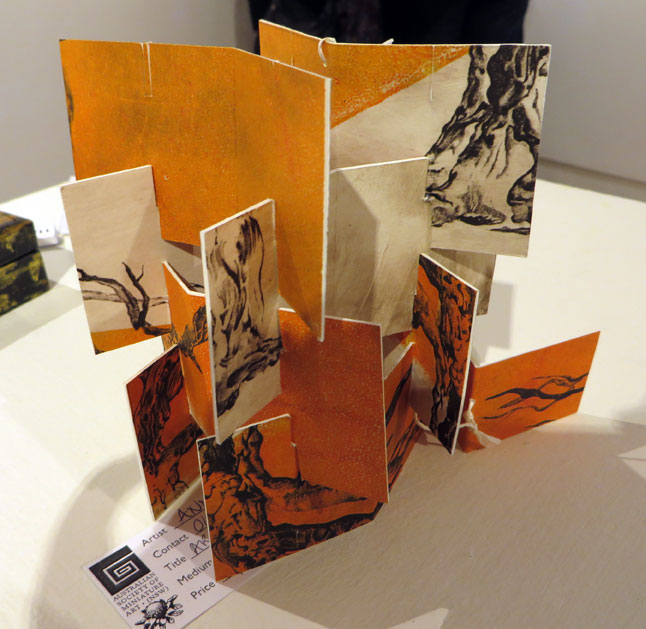