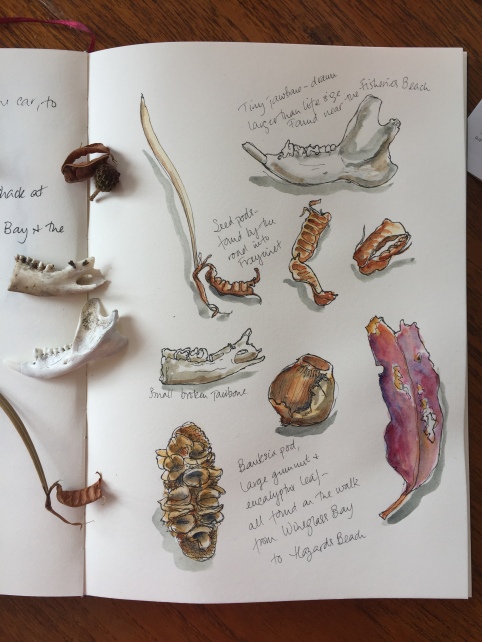 In the middle of December I flew down to Hobart to join my partner who had taken the car over on the ferry a couple of weeks before, as he had work to do at the University of Tasmania in Hobart. After a few days there, of course visiting the wonderful MONA (Museum of Old and New Art), we spent a week in a friend’s beach ‘shack’ in Freycinet National Park, one of the most beautiful places in Tasmania. We walked – one walk that we HAD to do was a climb up to look down at Wineglass Bay, then down the other side, a long loop across a marsh, another beach and through the bush back. About 11 km it took us 5 hours and was a good workout, but worth it!

On other days we drove to walk on the Friendly Beaches – the sea intense turquoise blue and sand white, with rock pools at the water’s edge, The Gardens with the same coloured ocean and sand, but massive boulders covered with orange lichen … and numerous others. In between we relaxed, read and I drew. From Freycinet we moved up the coast to St Helens, a small fishing town in the Bay of Fires, then camped at Policeman’s Point a bit further up the coast, still in the Bay of Fires. A beautiful spot for bush camping and walking on the beach until it rained … but we weren’t daunted and took ourselves to Bridport on the north coast. An unexpected delight, the coastline composed of numerous small beaches bordered by rocks. And the sun shone again!

Our last stop was Launceston, another pretty small city, hilly like Hobart, with elaborate Victorian architecture. We watched the New Year fireworks from a park by the Tamar River – a delight to be so close and walk back to our hotel in a matter of minutes, very different from Sydney! On the ferry back to Melbourne we had a very comfortable cabin, the Bass Strait was a millpond, so a simple and uneventful (thank goodness, I am a very bad sailor!) trip. Then towards home, catching up with friends along the way.

I only had time to sketch between Freycinet and Bridport, but took every opportunity I could, walking around with my eyes on the ground looking for any attractive little object! 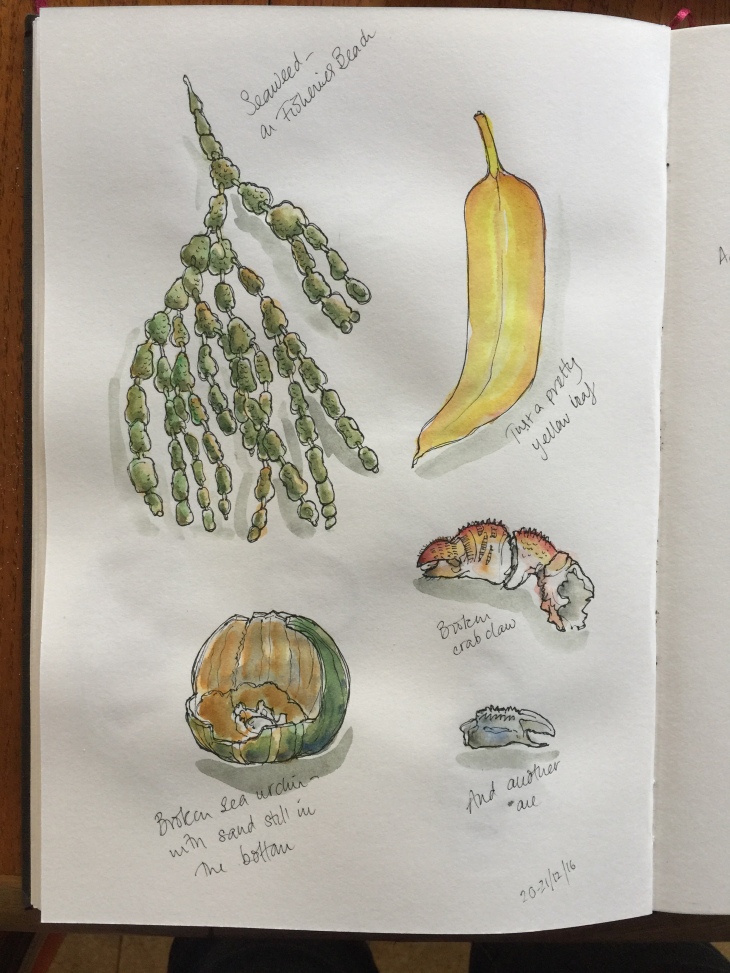 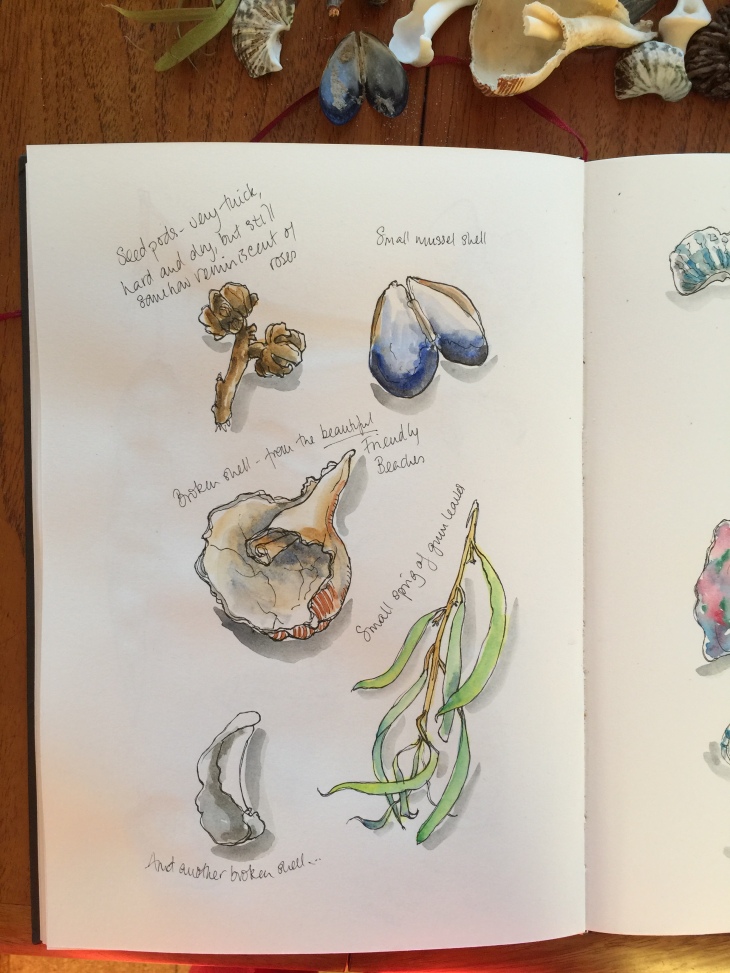 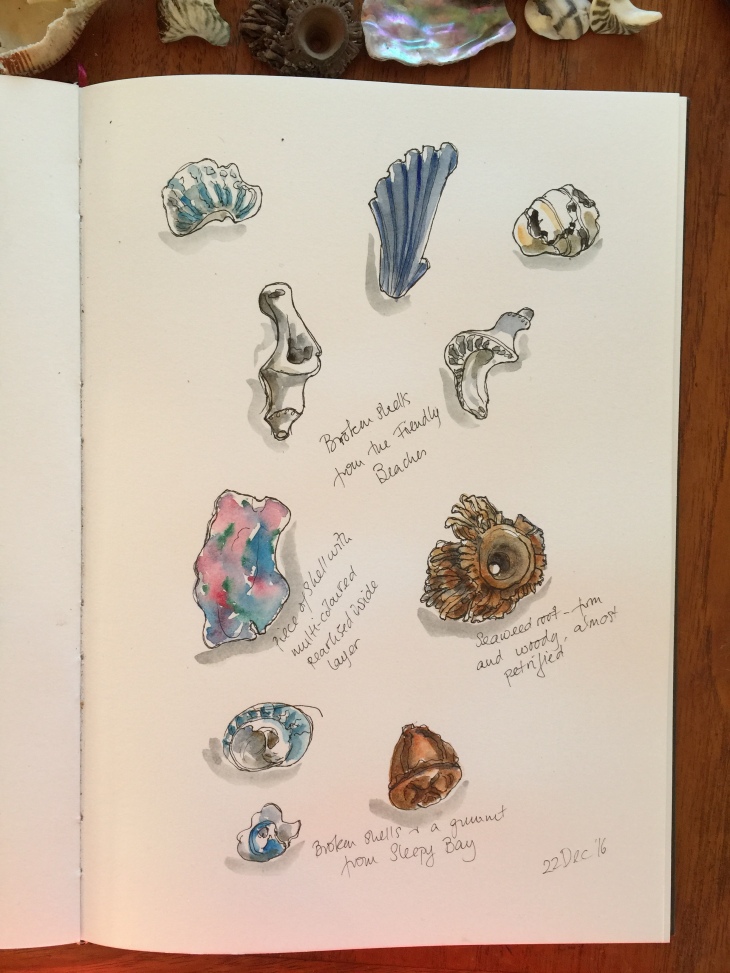 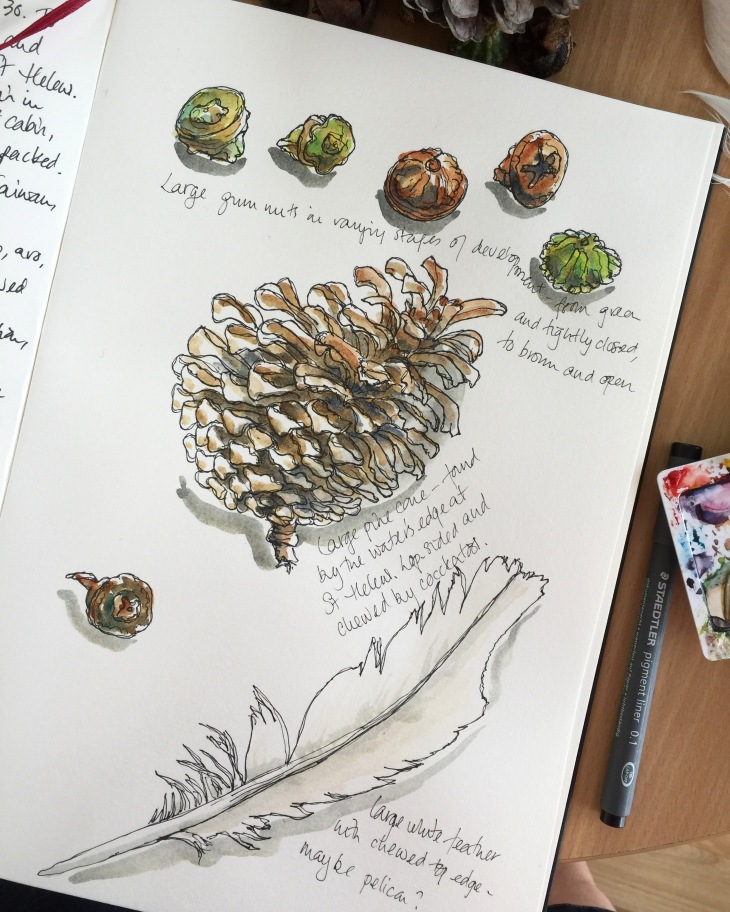 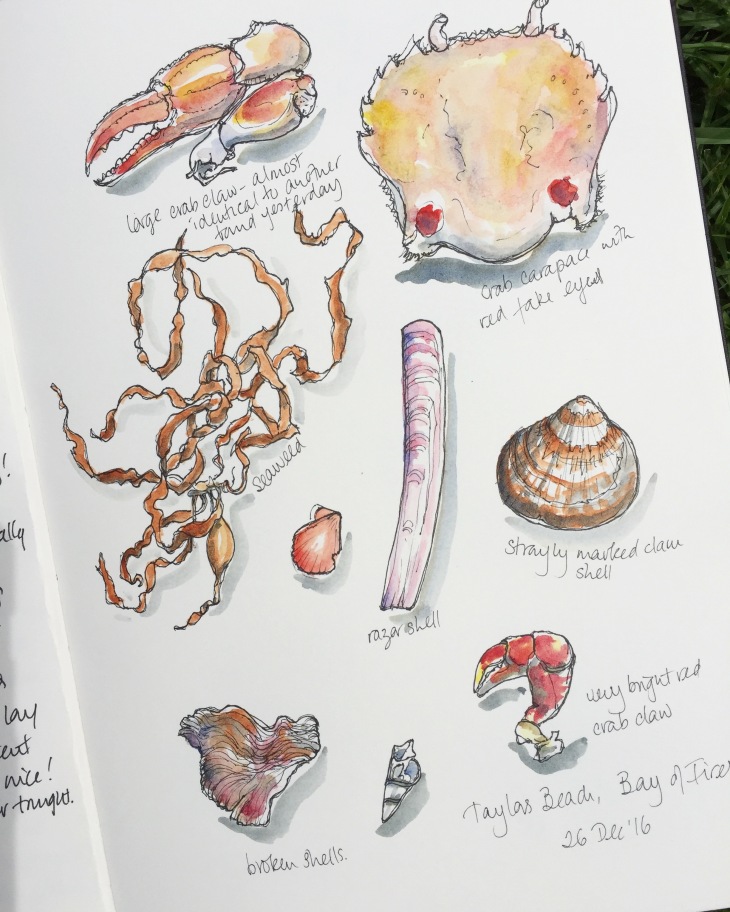 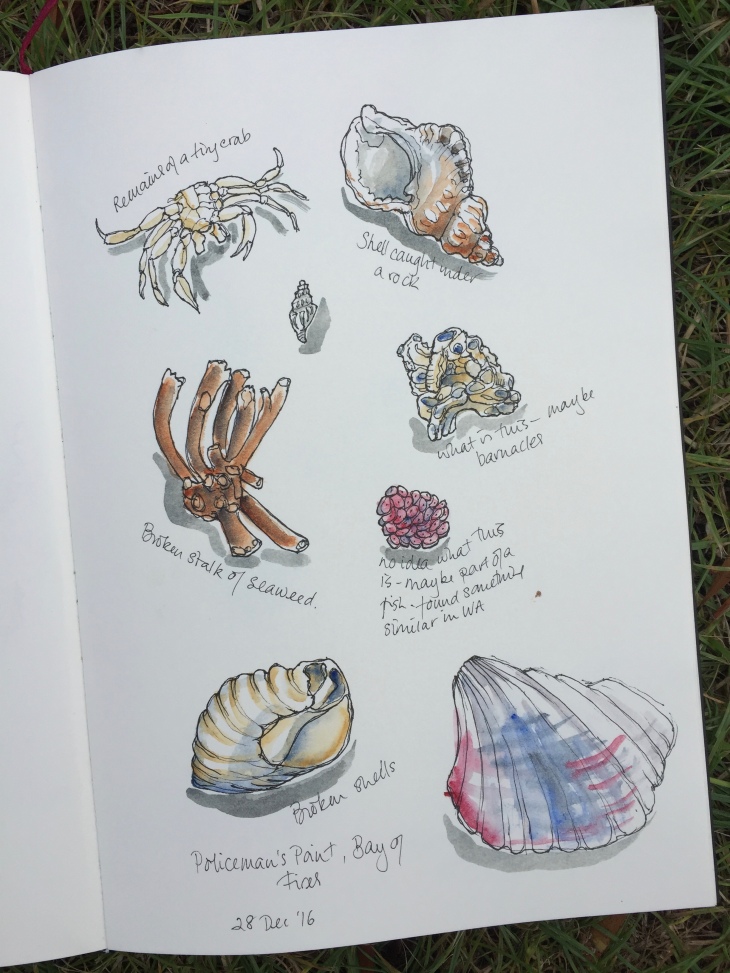 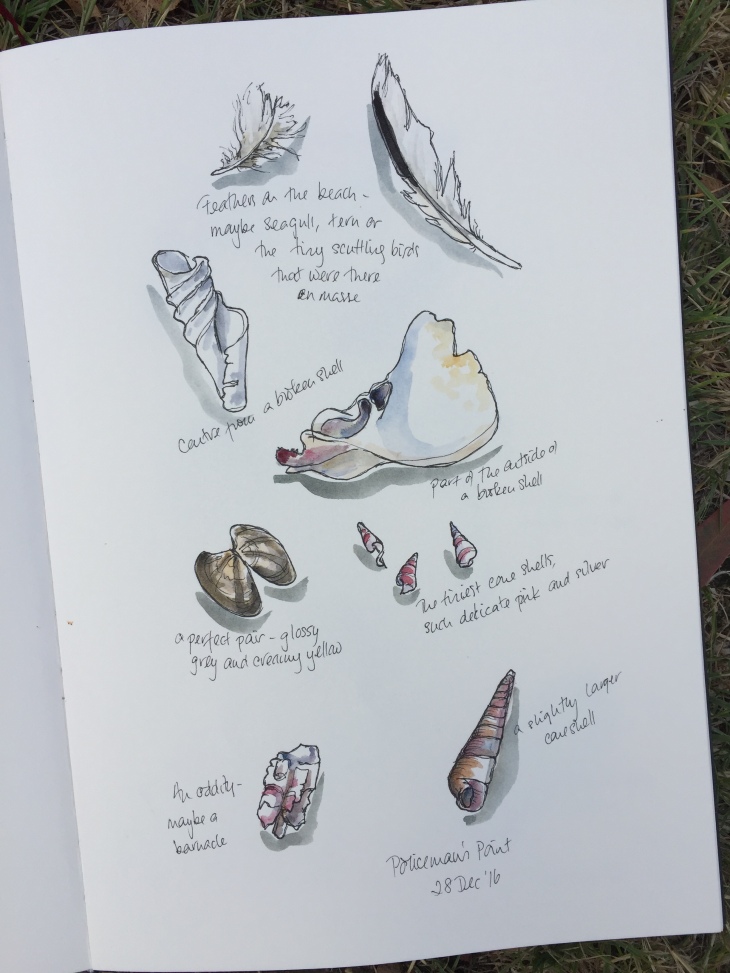 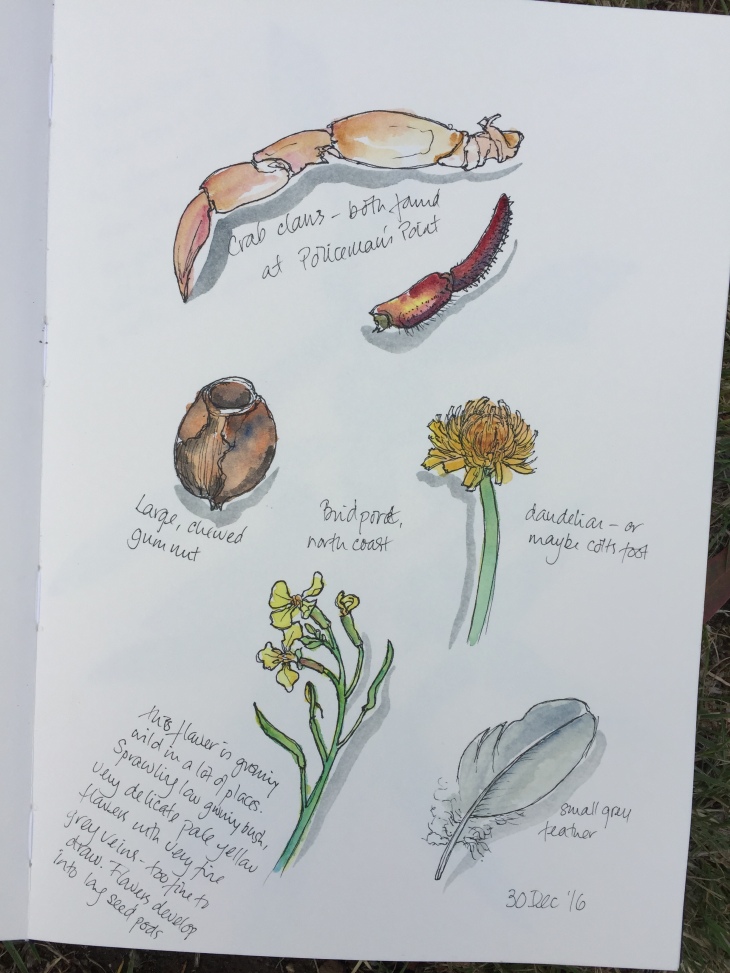 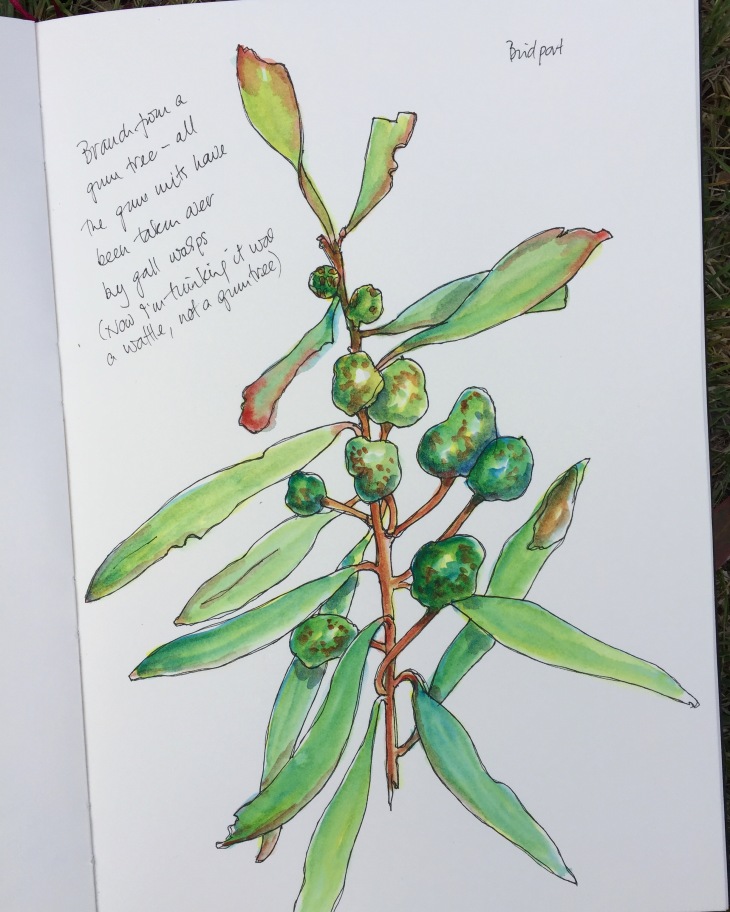