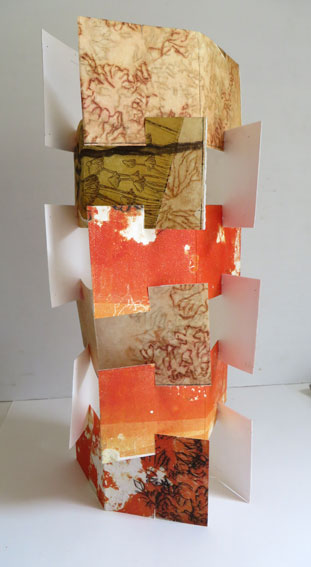 I was expecting to be making a more conventional book with these pieces of print, but when I came to put them together I realised that the detail was lost folded into a book, so started to work out ways of using the panels that I had cut and folded in a different way. It took some time of just playing with the pieces, arranging them, piling them up, turning them upside down, inserting one inside another before the idea of an interlocking stack evolved.

Where this began was with two large multi-plate prints, in complementary but contrasting colours, one in tones of gold and brown, the other in orangey reds and dark brown. For all the recent printing (including last week’s Lichen letters) I have been using just three colours of ink: sepia, yellow and red, and creating the final colours by mixing and overprinting. The imagery was some of the same drypoint plates I used before with marks inspired by lichen and flax seed heads, plus some small etchings of mushrooms that I made some years ago.

As I had planned to make a small book, I divided both prints up into six long panels (roughly 20 x 9 cm) and folded each in half. To make the pieces lock together, I cut a small slit in the centre of each half along the long edges of the panels, then slotted one into another. The way they are shown here may not be the final construction – they could be interlocked in a more horizontal way, or more randomly. I am not sure if the amount of white showing is a good thing or not – I could place two panels back to back and lock them so that there is no white showing. Something I do like in an artwork is a degree of interactivity, so that another person could come along and re-arrange the pieces in a way that they find satisfying.

Below are more views of the tower, and a gallery of the 12 pieces from the two prints. 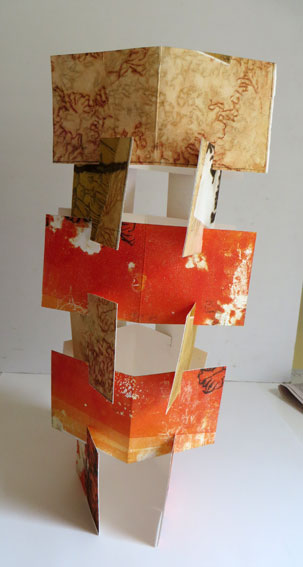 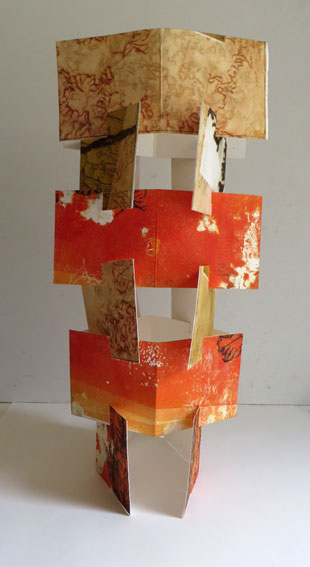